Featuring 38 taps including a handful of guest taps (flights are available but can’t include guest taps). Six chairs at the bar but plenty of standing bar space several tables inside and outside including a second bar off to the left with its own eight taps. 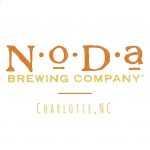 This newer North End location is quite large. Upon entering, you’ll see off to the right of the main bar is a conference room that can apparently be rented out for small classes or meetings. There are several beer posters and artwork featuring their own beers and names.

Outside there is plenty of seating as well as string lighting. There is an area for dogs as well as frisbee golf and a food truck. On the Tuesday night I visited, it was Tim’s kitchen which also presented a menu printed inside. Free water is available by the bar and there is a couch to sit upon. Crowlers are available as well as a multitude of coozies and other merchandise featuring different brands of Noda brewing.